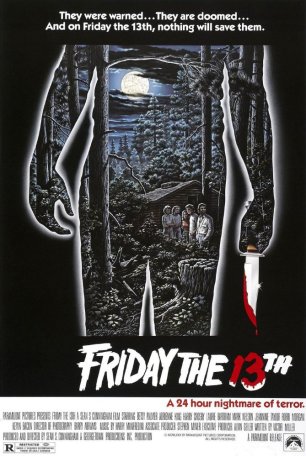 Release Date: 1980
Director: Sean S. Cunningham
Starring: Adrienne King, Kevin Bacon, Betsy Palmer
Plot: A work day at a summer camp turns into a slaughter-fest.
Why it’s recommended: Not only is it the birth of one the most influential horror baddies and one of the most asinine movie franchises, Friday the 13th doesn’t play out like people expect. Also, it has quite possibly my most favorite jump scare out of any horror movie I’ve seen.
Interesting Fact: Because the camp was closed during filming, and situated in the deep New Jersey woods, the cast and crew didn’t see much outside interference, but it turned out they had a very famous neighbor: rock star Lou Reed, who owned a farm nearby. “We got to watch Lou Reed play for free, right in front of us, while we were making the film,” Soundman Richard Murphy said. “He came by the set, and we hung around with each other, and he was just a really great guy.”
Best Line: “You’re doomed! You’re all doomed!”
Rotten Tomatoes Score: 61%

*Featured in Steven Schneider’s “101 Horror Movies You Must See Before You Die”.