I couldn’t list my top 10 SAW traps without at least mentioning the famous Razor Box from SAW II. If you’ve heard anything about SAW II, it was most likely this scene.

Coming back to SAW II, we have entered the final act. The big twists are beginning to unravel, our group is torn apart, and Xavier has discovered the true secret to escaping the death house. Off on her own, Addison discovers an unexplored room with a large clear box hanging from the ceiling. She grabs the envelope, but the audience doesn’t get to see who it is for. Although given the design of the trap, we can guess. We see that in the box there is a single syringe of the cure with two strange looking holes. Addison, desperate and devoid of all fucks, just throws the tape away. She gazes into the box and puts one arm through one of the holes. We can see the holes are some kind of sharp blade meant for trapping the victim’s arm inside. Addison tries to grab the syringe, but it is glued to the bottom. The syringe breaks, spilling the cure, and, losing her shit, Addison puts her other arm through the second hole therefore sealing her fate. This is the moment everyone (even me) goes, “Oh you fucking dumbass!”. Addison, the dumbest victim is the entire SAW franchise, solidifies herself as a meme until the end of time.

Before we move on, I found a very interesting fun fact about this trap:

In an early script of Saw II, the trap planned for Addison was written to resemble a waffle iron. Upon trying to grab a syringe with the antidote, two clamps would trap her wrists and slowly heat up. In order to free herself, she had to press her face against a third hot iron positioned right in front of her. This would activate a mechanism that would release her from the clamps so she could obtain the syringe. Her instruction tape would have said something like “she had to sacrifice her looks in order to save her life. 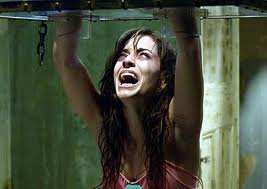 Damn. Could you imagine? That would have been so great. I agree with everyone that The Razor Box scene was definitely one of the dumbest scenes in the entire franchise. But hey, we all joined together in laughter at the stupidity of Addison’s actions. And, I think, that is all that matters